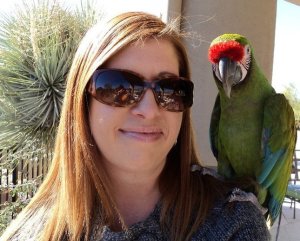 Introducing my friend, Amber Puckett, and her beautiful friend, Chulla:

I first met Chulla, my beautiful 12 year old military macaw, in December of 2007. I was babysitting for a friend who rescues unwanted parrots, mostly macaws. Chulla had been placed up for adoption one year earlier by her owners because she was very loud and had a tendency to bite on occasion. At that time, I considered myself an “Amazon” person and not so much a “macaw” person. I had lived with my double yellow head amazon, Rudy, since 1992 and she was the biggest parrot that I had owned. I didn’t have much experience with macaws except for my occasional babysitting adventures.

During the week that I babysat the 36 macaws, Chulla followed me all over the house. I could put her at one end of the house and within minutes, she would come find me. This was a little intimidating at first, but she was so beautiful that I gave in to her and we started our relationship. Once my friend came back from her vacation, I visited Chulla every day after work for 6 months to make sure that we did in fact have a real connection and that I had what it took to be a full time macaw mom.

Now, 5 years later, I cannot imagine my life without this funny, sweet, gentle giant green bird. We have a connection that I can’t describe. “She picked me” is what I often tell people. I’m glad she did.

Earlier this year, Mary Rose told me that she had met Carlos Bonilla, the biologist from the Military Macaw project in Mexico, while she was at a conference in Canada. I had never heard of this project except when our bird club participated in the “Pennies for Parrots” program in 2011. I needed to find out more about them. Mary said that they had trips available to Mexico with the biologists and you could go see the military macaws in the wild. I decided that I was going to put that on my list of things to do ASAP! Being friends with Mary Rose has allowed me to visit the Puerto Rican amazons and have a dinner with Bennett Hennessey , so she is a pretty valuable person to have in your friends list! Thank you, Mary!

So, speaking of having dinner with Bennett Hennessey, that is how this whole project came about. We were having dinner with a few of our bird club members and Bennett before he talked to our club about his Blue Throated and Red Fronted macaw project in Bolivia and Arlene just happened to mention that she was looking for a new project to work on. I spoke right up and said “You should paint a military macaw! The group at Macaws Forever needs help with funding!”  You see, when Mary mentioned the Military Macaw project in Mexico, I looked them up online, joined their group on Facebook, followed their posts, started my own Military Macaw owners group to help get other people interested, and started the Facebook group for Artists Supporting Avian Conservation so that the artist community could do projects like this to raise money to support the parrots.

Next year I am having one of those “milestone” birthdays and I am planning on celebrating it by going to Puerto Vallarta and visiting Claudia, Carlos, and 114 wild military macaws that they help protect. The Macaws Forever group is made up of volunteers such as researchers, veterinarians and biologists who genuinely care about protecting their native macaws. They fight such battles as stopping illegal trade and protecting the macaws native forest (from a potential 500 room resort that wants to build on the land where the macaws nest). The group also goes into the local schools and educates the children about why the macaws are so special and why they deserve to be protected. The work that they do is very important and they are just a very small group. They need help with funding so that they can continue the amazing work that they do. Please consider purchasing raffle tickets for the finished painting when they are available so that the Military Macaw program can continue to grow and visit their website to learn more about them at www.macawforever.org/