Archive for the ‘Macaws’ Category

The CEA count went up to 850 – NOT GOOD – so we have changed the protocol again. In the meantime, the oncologist has referred us to TGen for gene studies and possible clinical trials. We will make that appointment as soon as the cat-scan is done. That appointment this Thursday. Except during the treatment week, I am feeling pretty good and have some energy, but stay tired most of the time. Once again, I have to to Thank all of you for the prayers, good intentions, and positive thoughts. Could not have made it this far without every one of you. This is what community is.

Still working the metal, here are a few of the new ones. 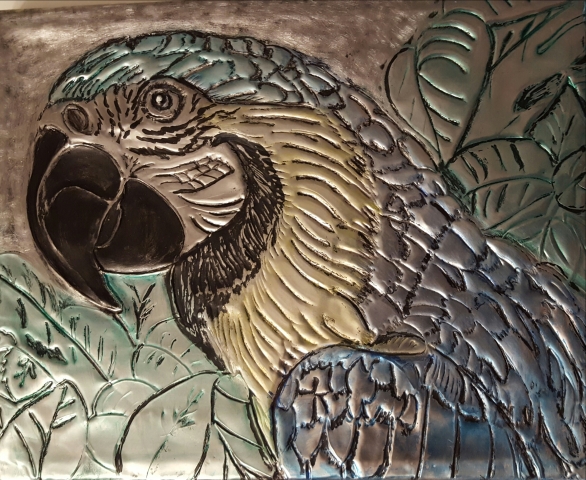 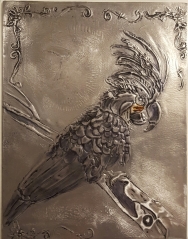 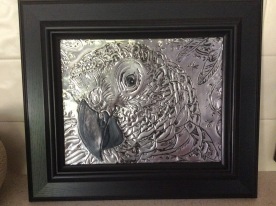 Stay tuned, next week will post some Christmas cards with metal embossing on them. In the meantime, it is nap time,zzzzzzzzzzzzzzzz. 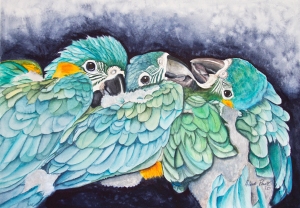 If you have been following my blog for a while, you have seen my painting, “Triple Time Blues”. This painting was donated to the Bird Endowment, and is going up for auction Jan 24 at the NPRPF Parrot Festival  Banquet being held in Houston. Here is a quote from my blog from 6-10-14 about the painting and my artist mission:

“Usually when you think of Blues, you think of sad times, but Thanks to a wonderful friend of mine, Laney Rickman, when I think of Blues, I think of music and parrots! She is the head of a wonderful organization, the Bird Endowment, which has the awesome Mission of “Saving The Blues”. Bird Endowment works with the Blue Throat Macaw, which is one of our most endangered macaws in the wild. To learn more about them, please check out their website: http://www.birdendowment.org – They have some great programs to help you get involved in Blue Throat Macaw conservation like the Nino Adoptivo program, you can actually sponsor a nest and help the propagation of the Blue Throat Macaw in Bolivia! SO what does this have to do with the Blues? My personal mission as an artist is to support Avian /Wildlife organizations who promote conservation, education, rehabilitation and research. SO I donate a few paintings to organizations to raffle, auction, raise money, or even just to raise awareness.”

Laney has taken time out of her VERY busy schedule to write a guest blog, so without further ado……Laney Rickman

At The Blues Conservatory™ in Texas, our Saving the Blues™ parent-rearing program preserves and perpetuates the integrity of the Blue-throated Macaw cultural identity and provides future breeding birds with the best potential for hatching and parent-rearing their own offspring.

*The Triplets* are the culmination of a series of important milestones. Here is some historical perspective.

Great-grandparents *Ira & Eureka* were our very first pair of Blue-throated Macaws, acquired in 1992. They were also our first wild-caught pair, legally imported in 1981. They had been with several breeders but produced their first chicks with us in 1993. Founder Pair #1 raised *Xena* in 1997.

Grandparents *Xena & Trust* were our first F1 pair (first generation hatched in captivity) to produce and parent-rear offspring at The Blues Conservatory™. In 2002 they raised *Joplin*.

*Albert Collins, Francine Reed & Junior Wells* were the first, and only, clutch of three chicks successfully parent-reared at our facility. They are still together in The Flock. They represent not only the achievement of Bird Endowment’s long-term goals, but many gratifying memories for me as well.”

Thanks Laney, the best of luck with the auction and keep up the good work with the Blue Throat Macaws!!!! 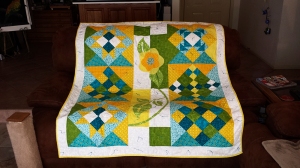 This photo was posted on Facebook, but for those of you who don’t FB here is the photo of the Prayer Quilt. It was done by the wonderful Prayers and Squares Quilt Ministry at the Houston Salvation Army. Each knot represents a prayer said for me. It brought tears to my eyes and joy to my heart. Thanks to all of you for the prayers and what a beautiful reminder of prayers said! 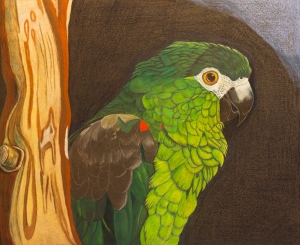 SO this week brings a new result of side effects. I don’t know if I have mentioned it before, but mouth sores are one of the side effects of the chemo. Well, I sidestepped the mouth sores, but have nose sores. The nurses said to use vaseline to keep them soft and not bleeding. So I have used vaseline and Saline Nasal Gel, which work; however, in the last couple of weeks, I have lost a lot of the sensation in my nose……..resulting in random “nose drip”. LOL, who ever thought I would be a snotty nosed ole lady?!?? Now in addition to checking me for charcoal, paint, and/or bird poop, before I leave the house, my family has to tell me to wipe my nose. This has been a good resting week, the nausea has not been as bad, and shock, I gained a couple of pounds this week. Guess, I will have to cut back on the hot fudge sundaes!

Here are a couple of photos on the progress on Charlie. The one in the middle was taken indoors in warm lighting, and the other one was taken outside in the shade and is closer to the real color of the drawing. Well, better go take a nap and get ready for chemo next week……where are my therapy kitties?!?!!?

Why the bed is not made!

Happy New year to all of you! Wishing you a great year full of all the people and critters you love. As you can see the cats are going to start the new year as usual and I won’t be making the bed. Hubby gets up early(5 ish) makes kitty breakfast, then rolls up two blankets into kitty beds. When I wake up …..yes, considerably later, this is the scene. These guys stay there all day until dinner time, then come out and stare us down until someone produces the gourmet meal. If you don’t have a cat, you cannot truly appreciate the power of a kitty “stare”. 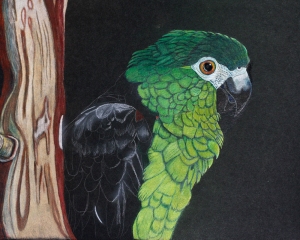 Meanwhile back at the ranch….after the kitty breakfast is prepared, the birds start screaming for their gourmet breakfast. Once that is done and served….blessed quiet, while the parrots eat, throw food and start planning the day’s chaos.

This has been a good resting week. I am really having to rest after chemo week and Christmas coinciding. Even though it was quiet compared to a normal Christmas, we still were surrounded by loved ones. SO here is the result of this week’s art therapy. I started a colored pencil on the mixed media paper – of Charlie. My little Hahn’s Macaw is known affectionately to the rest of the family as Hannibal the Cannibal. I don’t know where they get such a name!?!?!? Charlie is very affectionate with me, but from the blood evidence on the members of my family who dare to try to handle Charlie, maybe the name fits her? All I know is she is a little bundle of feathered joy to me. Charlie and Sunny have been the excuse for many an art store binge, after they have run down my arm and chewed up brushes and pencils. Like I really need an excuse to go to the art store, LOL.

Once again, as I look back over this year, I am Thankful for all of your prayers, good wishes, and positive thoughts. This year, together, we will continue to STOMP on cancer and win this war. 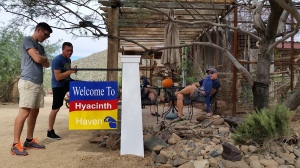 During my rest week, we were invited to a Hyacinth Macaw Party. Usually I don’t get out a lot, but this party Mici put on, was not to be missed! Most of my bird friends were attending, so I rested all week to be able to go for a while. Mici’s place is beyond amazing, we got the tour of the rescue horses, birds, goats and who could call the visit complete without the “Watch Pig”. Joey the celebrity bird, with his friend, Paco, crashed the party…..they are not hyacinths, but they do have some blue on them, so

guess that counts. Everyone had a wonderful time, got plenty of visiting time with the hyacinths, lots of scritching, kissing and cooing going on…..then we were treated to one of Mici’s “snacks only” spreads. all I can say is if I need to gain weight, I know where to go. Noelle was still in a cannoli coma the last I heard. Lori lost her son to all the activity for a while, last I heard he was full and tired out. Well even though I 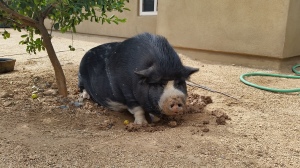 rested all week, only made it about an hour before fatigue set in, but it is an experience I will never forget. Mici and Fred are amazing, compassionate people, it is an honor to know them.

My phone decided to do a fitware update on my camera while we there, so I did not get any photos, luckily hubby took the ones here.

THREE DOWN AND NINE TO GO! Made it through another chemo week, slept until Friday afternoon and am awake and back to my new “normal”! Had a visit with the PA on Friday, and we are scheduling a petscan right after treatment six, to see how things are going and how well the chemo treatments are working. SO the fight goes on! My family is sure the chemo is helping. They see an improvement in my pain levels and energy levels, so I am sure we are winning the war. Keep those prayers, positive thoughts and well wishes going! Thanks so much!

Well, that is a new one on me! Going into the store the other day, I noticed green slime all over the sidewalk, and as I was leaving the checker said, “Watch out for the caterpillars!” I had been in a hurry, so it took that remark to bring it to my attention that all of that slime was squashed caterpillars. On the way out, I looked more closely and realized caterpillars were dropping from the sky. I guess we are going to have to come up with a campaign to save the caterpillars now.

Realizing I have been in quite the hurry to get the Spix Macaw painting done in time to send with Mary Rose, I realized that I had not even taken the time to talk about them. A lot of you are bird fans, so know their story, but in case some of you are not: The last known wild Spix Macaw died in 2000. There are under 100 in captivity and several breeding projects have been going on to keep the species going. They have been turned over to the Brazilian Government who is in the process of restoring a habitat for them. It is our fervent hope that the species may be restored to the wild, but the project has been beset with challenges. If you are interested, please research more, they are BEAUTIFUL birds, and extinction should not be their fate. We have the capability to save other endangered creatures who are also passengers on our spaceship earth and it is also our responsibility. As much as we have tried to separate ourselves from the natural, it is time to reconnect and realize that we are all  in this together, and each loss of a species is our great loss.

Ok, so I will step off of my soapbox and give you a glimpse of “Going Native Again”. Here is the rough drawing of my next Black and White project. Hopefully it recognizable as a Black Crowned Night Heron, LOL!

It is that time Again!

Due to deadlines to get this painting scanned and to Loro Parque before the convention this year, it is time to step away from the painting! A great Big “Thank You” to Mary Rose who is going to take the painting for me. Hope you enjoy!

Two Heads are better than one!

Another one of the Spix macaws done! Gotta get back to the drawing board……oops painting board. 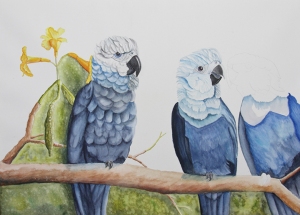