Yesterday, the Az Cardinals played football(yes they won!!) and Coach Arians was shown several times saying, “Tough times don’t last, tough people do.” The original quote is attributed to Gregory Peck, but I am sure this saying is a lot older. It reflects the spirit of optimism and hope, and is going to be one of my mantras during this battle against cancer. The current CEA count is 29.1, which is fast approaching our goal of under ten! Heading in the right direction! So when I am feeling sick from chemo, I can still say, “it is working, it is working!” Whoooo Hooooo! Only two more chemo treatments! However, I received the greatest birthday present this week. No nausea during this chemo week. It is the first time in almost one year of chemo treatments, and I have enjoyed it to the max! Take that cancer! Pow! Pow! 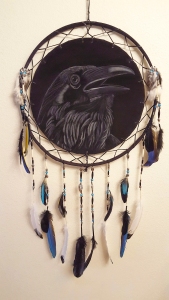 Here is  the Dreamcatcher I have been working on. Rupert is one of the ravens at Liberty Wildlife. He is quite the character and one of my favorite ravens ever. He talks in different voices and is just so intelligent! Barbara Delve(another Rupert devotee) took the photograph and was so kind as to let me use it for a reference for this special Dreamcatcher. Thanks so much Barb! This one went to Jan Miller as a big Thank You for all of her work at Liberty Wildlife, and her love and support during this cancer battle. Also a big Thank You to Margaret V for giving me a ride to Liberty to deliver Rupert. This was such a fun and special project, it is a blessing to be able to be involved in projects like this.

I have been having lots of kitty and parrot therapy and am felling well, with some tiredness. The guys have been really good, and I am wondering what they are really up to? SO if you figure it out, let me know!!!! Back to Rip Van Winkle land…….zzzzzzzzzzzz.