Good afternoon, at least it is here, don’t know about you. Before I post the photo of today’s progress, just thought I would give you an update on Missy…….After a long soak in a bubble bath, the gum still would not come out of Missy’s fur. Candy sounded a little worse for the wear….apparently cats don’t like to take a long soak in a bubble bath, so Candy is covered in bandages. WELLLLL, guess there is nothing else to do but to shave poor Missy…..will get back with you when that is done……sooooooooo whether not we are allowed back at Candy’s next week will probably depend on whether or not Candy is still covered in Band-aids, so whoever gave the gum to Missy – NO More GUM chewing allowed. Thank you for your cooperation in this matter. 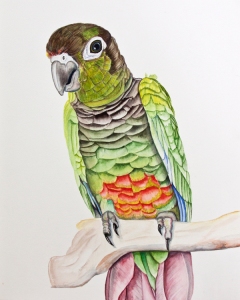 Now back to the WIP, as you can see the head is coming along pretty well.  Just a few more washes will be required at this point, and it is time (Oh NOOOOO!) to call in Arleenie Beenie (my clown persona) to do the background. It would be better to just get this over with, so after the background is dry I will be able to see what adjustments are needed. BUT, if you have never been through a WIP with me, you probably don’t know what a disaster….oops I mean a treat you are in for. Suffice to say, it gets a LITTLE messy so  this would be the time to bring your protective gear.

Since Thursday is My volunteer day at Liberty Wildlife, I may not have the energy or fortitude to deal with the clown until Friday, so don’t be surprised if the update is not done until Friday.

In the meantime, there may be a delay on the WIP, as Birdie is in talks with his lawyer, Ripley the African Grey. It seems he is tired of working for birdseed and peanuts, and is in negotiations for a better paying contract. I don’t know if a strike is eminent or not, so stay tuned……..Don’t worry folks, if things are not settled, I have plenty of other birds who will model. If the situation gets desperate, there are always Raptors to work with. As long as the parrots and corvids don’t get to them, they work really cheap.